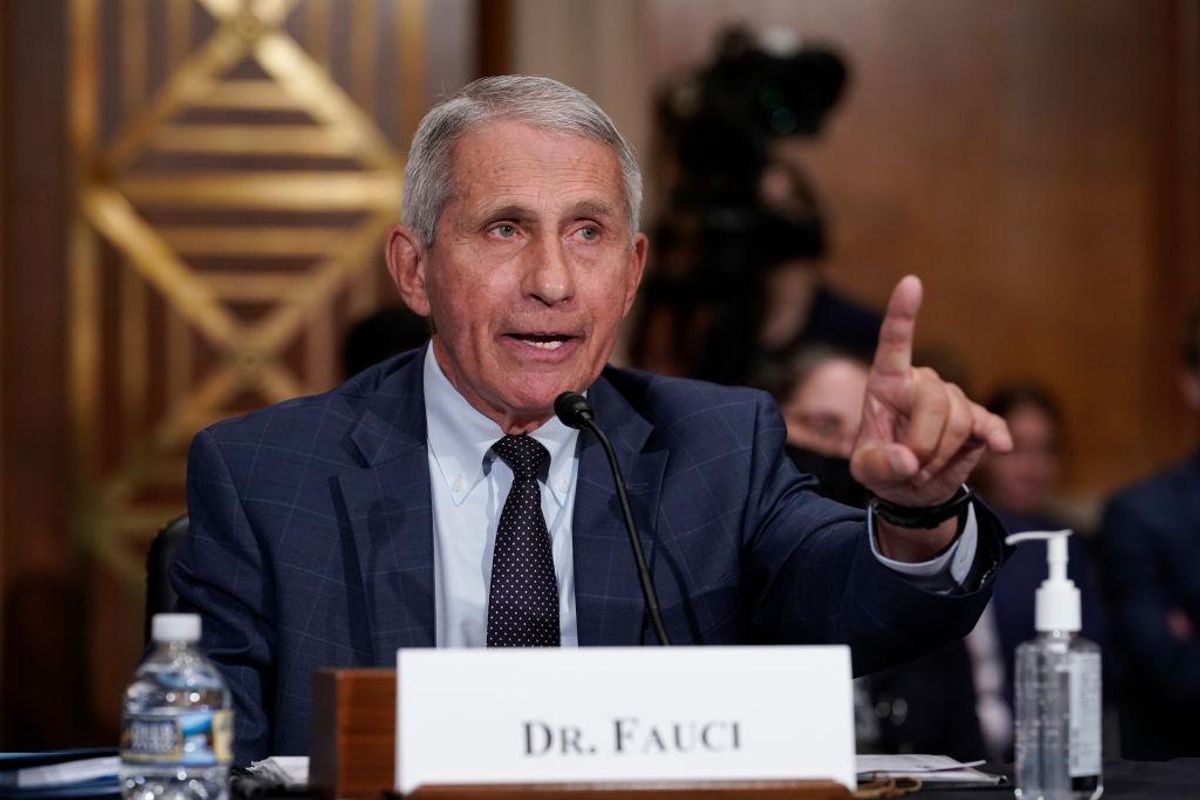 It is obvious by now that Dr. Anthony Fauci repeatedly lied to Congress. Reasonable people might disagree about the extent to which Fauci has been honest overall in his various pronouncements, but there can be no reasonable doubt, at this point, that on at least two occasions, Fauci looked a member of Congress directly in the eye, while under oath, and told a deliberate lie.

I am referring, of course, to the two exchanges Fauci had with Sen. Rand Paul (R-Ky.) about whether the NIAID had ever funded gain-of-function research at the Wuhan Institute of Virology. During the second exchange, Fauci even indignantly yelled at Paul, “You don’t know what you’re talking about!” after being reminded that it is a crime to lie to Congress.

Fauci undoubtedly knew that his answer was false when he gave it, both times. On January 27, 2020, Peter Daszak, the president of EcoHealth Alliance (who was responsible for granting the money to the WIV) notified Dr. David Morens, one of Fauci’s subordinates, that EcoHealth Alliance had awarded NIAID grant money to the WIV, as a not-so-subtle heads-up about what might be around the corner for Fauci. Morens responded, “Great info, thanks… [Dr. Fauci] doesn’t maintain awareness of these things and doesn’t know unless program officers tell him, which they rarely do, since they are across town and may not see him more than once a year, or less.”

The clear message was that Fauci was probably not aware before now, but that Morens would make him aware. Fauci certainly was aware by, at the latest, February 1, 2020, when he emailed NIAID Principal Director Hugh Auchincloss a copy of the research paper produced by the project Daszak referred to, which was literally titled, “Baric, Shi, et al – Nature Medicine – SARS Gain of function.pdf” — and in case there was any doubt, the paper went on to describe work that was done to increase the transmissibility of a virus among mammals (mice), thus clearly placing it within the NIH’s own definition of gain-of-function research. Auchincloss responded, “The paper you sent me says the experiments were performed before the gain of function pause but have since been reviewed and approved by NIH. Not sure what that means since Emily is sure that no Coronavirus work has gone through the P3 framework. She will try to determine if we have any distant ties to this work abroad,” to which Fauci responded, “OK, thanks.”

Other News:   London’s Financial Workers Flock Back to Office in Hot Commuter Crush

Any other human being on earth who then attempted to peddle the fantasy before Congress that his agency had not ever funded gain-of-function research would have been justly condemned as a bald-faced liar by this point. But the press (with a few notable exceptions) seems content to largely ignore this entire controversy. Why?

One possible reason is that many members of the press, who remain skeptical of the lab-leak theory, found Senator Paul’s question to be inappropriate, or feel that the implication it raised was, at best, unproven. That may or may not be so, but it does not provide Fauci with a pass to tell an outright falsehood under oath. If Fauci felt that answering the question “yes,” which would obviously have been truthful, would have raised an unjustified implication in his mind, then he certainly was free to expound on that and to explain why, even if the answer to Senator Paul’s question was “yes,” it wouldn’t matter. Definitely the press would have carried his water in that circumstance anyway. Instead, he chose to lie. The fact that America’s foremost public health official chose to tell a lie in such a situation ought to at least elicit curiosity from the media. But it hasn’t.

The reason goes beyond the obvious liberal bias of most of the legacy media. One unfortunate product of the times we live in is that policies and people have become too intertwined. The public at large does not evaluate policies and proposals on their own merits, but rather on the basis of whether the “right” people support or oppose those policies.

Perhaps never was this more obviously illustrated than with President Donald Trump. In both a negative and positive way, everything he did and proposed was viewed entirely through the lens of how you felt about him, rather than whether what he was saying made good sense or not. Many of his opponents rejected his proposals, even though previously they had publicly supported those proposals, just because they came from Trump. Similarly, many of his supporters cheered his proposals, even when they were antithetical to what they had professed to believe for years.

The converse was also true. Many of the people who supported Trump because of his policies defended him from some justified attacks because they felt that if Trump went down, those policies would go down with him. Likewise, many people who opposed Trump did so entirely because they wanted to see his policies discredited.

Thus it is, likewise, with Fauci. It ought to be the case that the policies he supports — including the masks, the social distancing, the restrictions on business — should stand or fall on their own merit. Plenty of other people also support them, so we ought to be able to discuss whether Fauci has been serially dishonest about the potential origins of the pandemic without implicating the entire COVID-response playbook favored by Democrats and the left.

Other News:   China to Wipe out ‘Black Sheep’ From the Party Amid Power Struggle: Experts

But, sadly, that is not the way that politics works these days. The media, which by and large favors Fauci’s approach to the pandemic, believes (probably correctly) that if Fauci’s reputation goes down, then all of the policies they support will go down with him, even though there is no logical reason for that to be true. And so we are deprived of a national media willing to do their job and look into even the most obvious of lies, or to ask any uncomfortable questions at all about a man who probably has more power now than any bureaucrat in American history has ever had, including the rather important question of whether, through failure to exercise proper oversight, his agency might have funded the start of the pandemic with taxpayer dollars.

Ideas, policies, and proposals ought to stand on their own merit. If they are good, they should be followed, regardless of who supports them or champions them. If they are bad, they should be rejected even if our favorite people support them or champion them. That’s not how it works any more, and that’s the real reason why the press will probably never become interested in anything negative Anthony Fauci might have said or done — including lying to Congress.