Sen. Kevin Cramer: ‘What I Get Concerned About Is a Political Movement That Devalues Police Officers’ 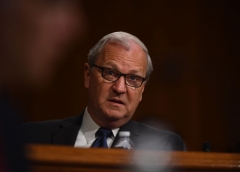 (CNSNews.com) – Sen. Kevin Cramer (R-N.D.) told NBC’s “Meet the Press” on Sunday that while Kyle Rittenhouse is “probably being hailed as a hero by some” conservatives, Cramer thinks he’s being hailed as “an innocent person.”

“The symbolism that surrounded it I think is not reflective of the facts on the ground. I think frankly Jon Tester explained it pretty well. I mean, justice has been done by a jury of his peers. I think frankly that when you look at the videotape, the videos and things that became more apparent later in the trial, you find a kid that was in the wrong place at the wrong time, should not have had a gun probably with him, but he didn’t provoke what was happening to him,” Cramer said.

“He responded in self-defense. I think it should, people should be reminded that the people that he shot were also violent criminals, and armed at that. It’s not like he just snuck up on some guys. So the problem is I think justice was done, but the rhetoric surrounding it probably on both sides is inappropriate to the actual event itself.

When asked whether the verdict in the Rittenhouse case sends the wrong message, Cramer said, “Well, what I get concerned about is a political movement that devalues police officers, that then cuts their funding, that makes them into the bad guys in keeping our streets safe and our communities safe. That kind of rhetoric, I’m afraid, leads to the very same violence that we’re talking about.

“Now, a lot of people talk about having a discussion. The very first public event I had after I got to Congress was having a discussion around guns that included lots of people, including people of faith, people from schools, practitioners, pastors, and we don’t do that anymore, and I agree,” he said.

Other News:   NY State Assembly report details extensive wrongdoing by ex-Gov Andrew Cuomo, says he was 'not fully transparent regarding the number of nursing home residents who died as a result of COVID-19'

When asked whether the rise in open carry laws and “stand your ground” laws sends the wrong message of almost encouraging people to use their weapon in public places, Cramer said, “No, I think it sends the message that you have a right to defend yourself against increasing violence, and, again, let’s get back to supporting our police officers.

“Let’s get back to supporting solid laws that protect innocent people so that innocent people don’t feel like they have to always protect themselves. That said, they do have the right to defend themselves, especially in their own homes, which is largely what some of the laws you’re talking about are about, particularly ‘stand your ground,’” he said.

Other News:   “I’m Heading Back, Jill, I Promise!” – Nurse Jill Has to Help Biden Along at “Friendsgiving” Celebration with Military Families (VIDEO)

“I don’t know, Chuck. There are an awful lot of stories about people who are grateful that the person next to them at a public space was carrying when there wasn’t anybody else there to protect them against another violent criminal. I don’t think this is so much about guns as it is about the heart of people,” Cramer said.

“There is no question that we are living at a time in our country where the Congress that you see that appears very divided is really a reflection of our communities that are very divided. So we all have a role to play in this,” he said.

“It’s not just top-down or just bottom-up. We all have a role, and we ought to use our platforms to do that,” the senator said.