Ben Shapiro: Elective Monarch Biden Could Take a Few Lessons From Charles I 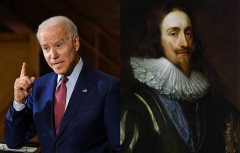 In 1629, frustrated by the unwillingness of Parliament to grant him taxation power, King Charles I of England dissolved the body and had nine members arrested. He did not recall Parliament for over a decade.

The intervening period, known as Personal Rule, saw Charles I govern as a de facto dictator, with only a body of councilors to advise him. In 1640, forced by military necessity from Scotland, Charles I recalled Parliament in order to raise money to pay the military; shortly thereafter, stymied by Parliament, he dissolved the body again. But necessity encroached once again, and Charles I finally recalled Parliament. This would be the beginning of the end of his monarchy: the Long Parliament, as it would later be called, directly opposed many of Charles I’s initiatives, and that opposition would devolve into the English Civil War — a war that ended with Charles I’s execution.

All of this should serve as a brief reminder that when a chief executive ignores checks and balances, he may maximize his authority temporarily. But after a while, the royal saddle tends to chafe.

Other News:   Joe Biden, From Comedy to Tragedy

We are now approaching an inflection point in the United States: Do we want an elective monarchy, or not? A great many Americans seem perfectly comfortable with such a system, so long as the president is of their party. Today, the president of the United States is elected once every four years; he mouths platitudes about respect for norms and institutions; and then he proceeds to do what he wants, using the authority of the administrative state as his scepter. The legislature has become a vestigial organ, delegated only the power to fund enormous omnibus packages. True rule-making authority lies with the chief executive.

Thus, former President Barack Obama declared more than 20 times that he did not have the authority to unilaterally suspend elements of immigration law. That did not stop him from doing just that with the Deferred Action for Childhood Arrivals program. President Joe Biden recently declared he had no power to extend an eviction moratorium via the Centers for Disease Control and Prevention. That did not stop him from pursuing precisely that policy. Biden and his administration stated repeatedly that they did not have the power to unilaterally mandate COVID-19 vaccination. That power was to be exercised by the individual states. That did not stop Biden from mobilizing the vague grant of power under the Occupational Safety and Health Act to dictate that every business with more than 100 employees had to test its unvaccinated employees once per week, or vaccinate them, or fire them, or pay $14,000 per violation.

Other News:   Crowd goes wild for Trump at Holyfield fight…

There are only two institutions standing in the way of full-fledged presidential monarchy: the courts and the states. Biden has pledged to override the states: “If these governors won’t help us beat the pandemic, I’ll use my power as president to get them out of the way.” And while Biden has pledged not to stack the courts, his prior institutional pledges have lasted only as long as his power remains unchallenged; he repeatedly suggested he would not seek to destroy the filibuster but has now apparently flipped on that subject.

The problem with elective monarchy is that it destroys the feedback mechanisms that help balance a pluralistic, decentralized society. Charles I could reign under the precepts of Personal Rule just so long as his impositions were moderate and his foreign policy peaceful. The minute serious complications arose, Personal Rule began to collapse.

The same will hold true in the United States. Charles I had the authority of kingship, but not consolidated compulsory control. That made his dictatorship unstable. The lesson for us is simple: We may want change, and we may want to carve a path through the checks and balances that obstruct that change by granting near-total power to an elective monarch. But unity won’t follow. Chaos will.

Ben Shapiro, 37, is a graduate of UCLA and Harvard Law School, host of “The Ben Shapiro Show,” and editor-in-chief of DailyWire.com. He is the author of the New York Times bestsellers “How To Destroy America In Three Easy Steps,” “The Right Side Of History,” and “Bullies.”