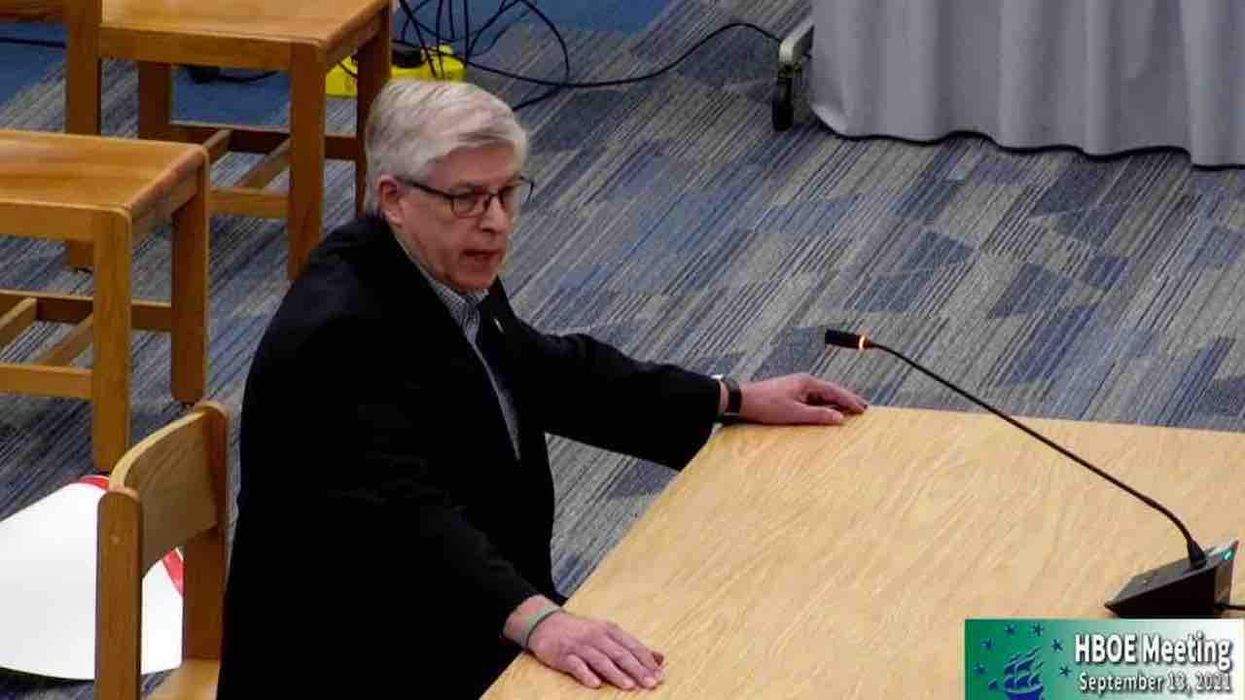 Mayor Craig Shubert of Hudson, Ohio, sat in front of a microphone and issued a brief but pointed public statement to the members of the city’s board of education earlier this week.

“It has come to my attention that your educators are distributing essentially what is child pornography in the classroom,” Shubert said during Monday night’s meeting. “I’ve spoken to a judge this evening. She’s already confirmed that. So I’m going to give you a simple choice: Either you choose to resign from this board of education, or you will be charged. Thank you.”

The mayor’s jaw-dropping ultimatum to the board members of Hudson City Schools drew quite a bit of applause and cheers from those gathered in the room.

According to the Akron Beacon Journal, numerous parents complained about writing prompts in the “642 Things to Write About” book that’s part of a college-credit course — Writing in the Liberal Arts II — at Hudson High School.

More from the paper:

Parents said there was a prompt that asked students to “write a sex scene you wouldn’t show your mom,” and another which said “rewrite the sex scene from above into one that you’d let your mom read.”

Another prompt asked students to drink a beer and describe how it tastes. Parents said they felt these writing prompts and others were not appropriate for high school students.

Shubert said he wants all five board members to resign by the end of September, the Beacon Journal noted.

However, the paper added that it’s unclear whether board members can be held criminally liable for classroom material.

Lusher added to the paper that he can’t determine if the material “would cross a line or not” since he hasn’t yet seen it.

But some individuals who have viewed the material were decidedly outraged by it. One person said he was “appalled” by the content and asked for video cameras in the classroom so parents can monitor what’s being taught to their children, the Beacon Journal said, adding that another speaker said it’s “disgusting” and amounted to “grooming.”

What did the school district have to say?

Superintendent Phil Herman said in a statement that the “inappropriate and offensive writing prompts” were part of a supplemental resource used in the high school senior-level College Credit Plus writing sections, the paper reported.

“The district immediately determined this writing resource should not be in the hands of our students, and on Monday, collected the books from the students enrolled in the course,” Herman added, according to the Beacon Journal. “It is important to note that at no time were any of these inappropriate writing prompts assigned as part of the class.”

More from the paper:

High school principal Brian Wilch said the class is offered in association with Hiram College but is taught at the high school. He also said the “642 Things” book has been used in the past.

Wilch told the board Monday that he and his administrative team apologized to the students’ parents. The school is searching for replacement material that is suitable for high school students, he said.

“We did not exercise due diligence when we reviewed this resource and as a result, we overlooked several writing prompts among the 642 that are not appropriate for our high school audience,” Wilch added, according to the Beacon Journal. “… We feel terrible. At no time were any of these inappropriate prompts selected or discussed, but still they were there and they were viewable, and you can’t unsee them.”

Herman also told the paper that an independent investigation is under way “to determine how these supplemental materials were reviewed and approved, and if any additional action should be taken.”

“It is clear that as a district we did not properly review this resource, and for that, we sincerely apologize,” the superintendent also said, according to the Beacon Journal. “We take great pride in the instructional experience of our students and take very seriously anything that negatively impacts our mission to provide an educational program that provides for the development of each child in a safe, nurturing environment. Again, we are reviewing our approval processes to make sure that nothing similar happens in the future.”