Americans Are Owed A Debt, The Collection Of Which Will Be Terrifying 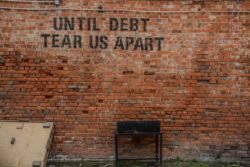 If you look at the life of the majority of Americans – and we frequently feel as if we’re not in the majority anymore, but we still are – as a “ledger”, the fact is we’re owed.

The Left would have you believe that we owe them, or some minority interest that they claim to represent, but in truth that minority interest is a part of our greater majority and the “owing” belongs squarely to those who thirst for power. They lie to these minority interests strictly to slake that dry mouth, but those interests are catching on. Soon enough they’ll realize, as most of the rest of us have, that on the balance sheet, they are indeed owed something – among other things, a monumental apology for all the many ways they’ve been lied to and used over the decades. But I digress.

Here’s the point; on the balance sheet of our ledger, the ruling class (dominated by hard-charging Leftists and soft-spined Righties) owes more than the trillions carried on the Federal Government books. This owing has been ongoing for a very long time, but we’ve essentially ignored it because whatever salve was offered in the moment – entertainment, full bellies, prevailing peace, false freedom – was sufficient for us to let it slide.

Entertainment is failing us on an epic scale now. In fact, we’re increasingly turning off television, movies, sports, etc. As more of us turn to information-gathering, we’re increasingly seeing just how bad things are, and how bad they’ve been for a very long time. Moreover, we’re realizing that the “news” we’ve consumed in the past has been little more than carefully crafted propaganda designed to continue the deception. In terms of mainstream offerings, we’re now turning that off, too.

Our bellies remain full now because the government has handed out food stamp money like candy at Halloween, but all the money in the world won’t matter as the shelves continue to go bare, or what few products remain are too expensive to buy even with Uncle Brandon’s fake money.

The peace has been disrupted already, and will be in even bigger danger once Antifa/BLM and other extraneous Leftist minions realize they’ve been failed by the Democrats yet again. Topping it off, once the Democrats realize they’ve lost it all, they’ll unleash the hounds. They’ve shown a willingness, even an enthusiasm, to do this already. Add to this the fact that our safeguards have all been and continue to be dismantled, and peace becomes impossible.

Other News:   Antifa and its Origins

And lastly, the overwhelming falseness of our “freedom” is now on full display with the COVID nonsense, particularly the forced vaccination of the entire civilization. This last bit is now coming for our children, a line in the sand most everyone I know has absolutely drawn that is virtually guaranteed to result in bloodshed.

What has served to salve us in the past is now failing. In fact, most of it is now serving to inflame us further, and that is only growing more true by the hour.

It is talked about almost as a joke these days, but the fact that we’re armed to the teeth is a reality that those in power don’t dismiss quite as quickly as everyone else because it is truly the only thing they fear. Those who poo-poo this gorilla in the room…

…or believe that the United States Military can somehow “handle it” are absolutely not thinking. Half a billion small arms and TRILLIONS of rounds of ammunition in the hands of a truly pissed-off populace is enough to terrify anyone with half a brain, particularly when that armed population decides it’s time to collect what is owed.

As you are reading this, ask yourself honestly – do you feel like it’s time, or even past time, we balanced the ledger?

You’re not alone. In fact, when you separate the Leftist zealots, who surely fight for the opposite of our true American values (but represent a much smaller demographic) and the sheep who will follow whatever course is laid out for them, you’ll find that what’s left is a vast and growing number of now-fully-awake Americans who are LITERALLY dusting off their weapons and getting in some quality range time. I’m speaking reality now, not “inciting” or anything of that sort. I’m telling it the way it is, not the way anyone from either side wishes it was or wasn’t.

Other News:   Parents protest after student who posted 'up-skirt' photos of female schoolmates is allowed to return to class

We, the overwhelming majority of the American populace, have been easily placated to this point, but that is now over. We’ve been duped, distracted, and somewhat divided by the powers that be, but that too is coming to a rapid close. We’ve been cajoled, bullied, and frightened into believing that standing up must never actually happen…

…and yet, our guns are no longer tucked into the corner of a closet. This is reality. It may seem like some kind of bizarro world because we’re simply not used to thinking and feeling this way, but what part of the last year or two hasn’t seemed like bizarro world? So again, I implore you, as you are reading this, to ask yourself honestly – do you feel what’s going on? Do you instinctively sense it? Is there that voice in the back of your head that is screaming to you as you read this sentence that what I’m saying is exactly right, and something very big and very ugly is just around the bend?

Do they who are “in charge” not realize this? Do they not understand that we don’t feel entertained, well-fed, peaceful, and free anymore? Do they not comprehend that a debt is owed, and we, the American people, are rapidly reaching the point where we’re finally going to stand up and collect?

How long before enough is enough? How long do we actually have? How long will the illusion last?

Nobody can answer that. If I had to make a guess, I’d say we have at most one more election cycle, and a short time afterward to see if it makes any difference. I don’t believe we’ll be provided that time, however, because the Antifa/BLM terrorists will force our hand before then, likely with the encouragement of the defeated Democrats and the spurring-on of the American Marxists who want all of this to come to pass in any case. I also believe that there are only a limited number of circumstances where “new elections” can make a difference regardless. If Donald Trump isn’t placed back in the White House, a moral and philosophical imperative at this point since we all know he is the rightfully elected President, it may be that nothing else matters. Even if he is restored to the Oval Office, it may be for naught if he isn’t then surrounded by America-first Republicans who will actually support him. If Republicans aren’t in the vast majority in both houses of Congress, and the majority of those aren’t America-first, Trump supporting, salve-the-people-with-actual-reform stalwarts, I fear the beast can no longer be caged.

In keeping with the gist of this, which is for me not to tell you how it is but rather for me to ask what you think, I’ll pose one last query…

Our “leaders” in Washington apparently do not understand that if someone with sufficient gravitas and the makings of a real organization behind them were to take the stage with a true message of revolution, that revolution will absolutely come to pass. Again, this isn’t a call for it to happen; this is an honest assessment that it’s more than possible – it’s damned likely.

You and I understand this, and this understanding that we have of these perilous times IS the message.

Somehow, those in “control” simply aren’t getting that message. How are they missing it? More importantly, what will be the result of their continued ignorance of these realities? Do they really want to see what happens when the Debt Collectors come to call?

The opinions expressed in this essay are solely those of the author and do not necessarily reflect those of anyone else.

Photo by Alice Pasqual on Unsplash

Americans Are Owed A Debt, The Collection Of Which Will Be Terrifying is posted on Conservative Daily News – Where Americans go for news, current events and commentary they can trust – Conservative News Website for U.S. News, Political Cartoons and more.