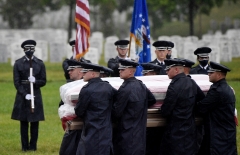 (CNS News) — Sens. Steve Daines (R-Mont.) and Elizabeth Warren (D-Mass.) introduced a bill today to award Congressional Gold Medals to the 13 U.S. service-members who died in the suicide bombing at the Kabul airport on Aug. 26.

“The 13 brave service members we lost in Afghanistan following the withdrawal will forever be remembered as heroes,” said Daines in a statement. “Their service and ultimate sacrifice to protect American lives, our freedoms and our homeland deserves the highest honor.”

“Each and every one of these Americans selflessly answered the call to serve our nation and for that, we are eternally thankful,” Daines said.

“We should honor these 13 service-members, including U.S. Marine Corps Sgt. Johanny Rosario Pichardo of Lawrence, Massachusetts, who were killed last month in Afghanistan while serving our country and working to protect the lives of others,” said Sen. Warren.

Other News:   Pelosi: ‘That's What Took Me Out of the Kitchen to Congress, From Housewife to House Speaker–For the Children’

“These individuals demonstrated incredible courage throughout their careers, and we owe it to them to pass legislation to recognize their heroic service with the Congressional Gold Medal,” she added.

Cpl. Hunter Lopez, 22, killed in the Aug. 26 suicide bombing at the Kabul airport.

The 13 U.S. service-members who died that day were,

Other News:   You created a monster, deal with it – Sheebah fights back

Other News:   Listen To This: Do It All Night!

A bill similar to the one in the Senate is in circulation in the House, with  reportedly 150 co-sponsors. The Senate bill reportedly has 30 co-sponsors, so far, including Sens. Marsha Blackburn (R-Tenn.), Mike Barasso (R-Wyo.), Richard Blumenthal (D-Conn.) and Dianne Feinstein (D-Calif.).