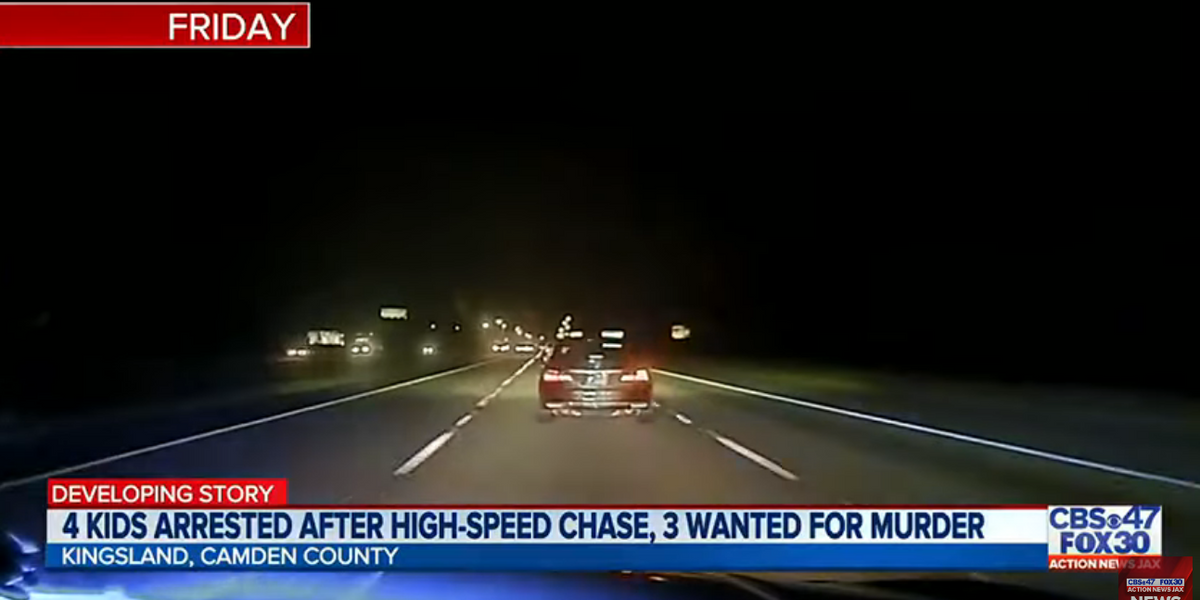 A group of kids aged 12 to 15 were arrested in Georgia on Friday after leading police on a wild 120 m.p.h. highway chase — three of them were wanted on murder and home invasion charges.

Police in Camden County, Georgia, had to use spike strips to stop a black Honda Accord they encountered traveling southbound on Interstate 95 at dangerous speeds Friday night, according to a post on the Kingsland Police Department’s Facebook page.

Officers reportedly first noticed the car traveling 96 m.p.h. on the highway and attempted to conduct a traffic stop, but the driver responded by speeding up to 120 m.p.h. in an attempt to flee. The vehicle eventually exited the interstate and made a U-turn allowing the officers to lay down the strips.

Upon successfully stopping the vehicle, officers discovered that it was a 12-year-old boy who had been driving. Inside the vehicle were three more passengers all under the age of 15.

But the shocking news only continued after officers ran the occupants’ names through a police database and discovered that three of them, including the driver, had active warrants out for their arrest for home invasion and second-degree murder in Duval County, Florida.

In all, police arrested three boys aged 12, 14, and 15, along with a 15-year-old girl. The four individuals are currently being held at a youth detention center, WJAX-TV reported.

Other News:   Afghanistan Goverment Brought to you by Bowe Bergdahl

The 12-year-old faces a litany of new charges as a result of the high-speed chase, including theft by bringing stolen property into the state, speeding, reckless driving, fleeing and attempting to elude, and fugitive from justice.

The other occupants face charges of theft by receiving stolen property and with fugitive from justice.

Authorities have so far refused to say which deadly home invasion the juveniles were arrested for taking part in, though WJAX pointed to a report from last week involving a group of minors breaking into a home on Huron St. and killing a 28-year-old man.

The break-in was reportedly caught on surveillance video and showed seven boys and one girl coming into the house, five of them with handguns.

The Jacksonville Sheriff’s Office sent the news outlet the following statement: “It does appear at least two of the subjects located in the stolen vehicle in Georgia are tied to an active investigation here in Jacksonville. Detectives continue to work diligently to identify those that may have played a part in the crime. As such, we are unable to provide additional details into the investigation at this time — to do so would impede further investigative efforts, arrests and/or prosecution.”