Psaki: Biden Has Confidence in Chairman Milley’s Leadership, ‘His Patriotism and His Fidelity to Our Constitution’ 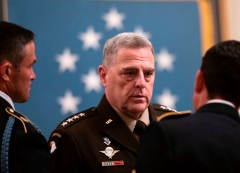 Chairman of the Joint Chiefs of Staff Gen. Mark Milley speaks with members of the military before the Medal of Honor ceremony for US Army Sergeant Major Thomas Payne for conspicuous gallantry while serving in Iraq, in the East Room of the White House in Washington, DC on September 11, 2020. (Photo by ANDREW CABALLERO-REYNOLDS/AFP via Getty Images)

(CNSNews.com) – White House Press Secretary Jen Psaki said Wednesday that President Joe Biden has “confidence” in Joint Chiefs Chairman Mark Milley’s leadership” as well as “his patriotism and his fidelity to the Constitution.”

Psaki was responding to allegations made in a new book by Washington Post reports Bob Woodward and Robert Costa that Milley spoke with Chinese communist leaders during the Trump administration, reportedly telling them: “You and I have known each other for now five years. If we’re going to attack, I’m going to call you ahead of time. It’s not going to be a surprise.”

The Chairman of the Joint Chiefs regularly communicates with Chiefs of Defense across the world, including with China and Russia. These conversations remain vital to improving mutual understanding of U.S. national security interests, reducing tensions, providing clarity and avoiding unintended consequences or conflict.

His calls with the Chinese and others in October and January were in keeping with these duties and responsibilities conveying reassurance in order to maintain strategic stability. All calls from the Chairman to his counterparts, including those reported, are staffed, coordinated and communicated with the Department of Defense and the interagency.

Also in keeping with his responsibilities as senior military advisor to the President and Secretary of Defense, General Milley frequently conducts meetings with uniformed leaders across the Services to ensure all leaders are aware of current issues.  The meeting regarding nuclear weapons protocols was to remind uniformed leaders in the Pentagon of the long-established and robust procedures in light of media reporting on the subject.

General Milley continues to act and advise within his authority in the lawful tradition of civilian control of the military and his oath to the Constitution.

“On this, does the president feel these calls were appropriate? Does he have confidence in the chairman? And some Republican senators have called for Chairman Milley to be dismissed. Is he going to keep his job?” the reporter asked.

“I saw the statement of course that the Department of Defense or I should say the Joint Chiefs spokesperson just released minutes ago. I’m not gonna add more or speak to anonymous unconfirmed reports about conversations with limited context from here,” Psaki said.

“What I can assure you all of is that the president knows General Milley. He has been chairman of the Joint Chiefs for almost eight months of his presidency. They’ve worked side by side through a range of international events. The president has complete confidence in his leadership, his patriotism, and his fidelity to our Constitution,” she said.

“Since you gave me the opportunity, I just wanted to add, I think it’s important to consider some of the context, key context of this period of time in history that we’re discussing and is outlined or covered in portions of this book,” the press secretary said.

Other News:   GM’s pickup money machine gets a technology tuneup

“The outgoing president of the United States during this period of time fomented unrest, leading to an insurrection and an attack on our nation’s capital on January 6, which you all have covered extensively of course – one of the darkest days in our nation’s history,” Psaki said.

“Beyond reports in this book, there’s been widespread reporting and commentary from members in his own cabinet – the former president’s cabinet I should say, including high-ranking national security officials questioning the former president’s stability, his behavior, and his suitability to oversee the national security of the United States,” she said.

Asked whether the president believes that Milley should testify before Congress about his actions during that time, Psaki said, “Look, I think we– the president has been clear with his administration and members of his cabinet and national security team that we’ll continue to work with Congress and cooperate with them as appropriate in meeting their needs.

“We’ve done that from the beginning of the administration. I would defer to the Department of Defense and the Joint Chiefs for further decisions,” the press secretary said.

When asked whether Biden has concerns that Milley perhaps worked outside the chain of command, Psaki repeated that the president has confidence in Milley’s leadership, patriotism, and fidelity to the Constitution.

If the story of “Dumbass” General Mark Milley, the same failed leader who engineered the worst withdrawal from a country, Afghanistan, in U.S. history, leaving behind many dead and wounded soldiers, many American citizens, and $85 Billion worth of the newest and most sophisticated Military equipment in the world, and our Country’s reputation, is true, then I assume he would be tried for TREASON in that he would have been dealing with his Chinese counterpart behind the President’s back and telling China that he would be giving them notification “of an attack.” Can’t do that!

The good news is that the story is Fake News concocted by a weak and ineffective General together with two authors who I refused to give an interview to because they write fiction, not fact. Actions should be taken immediately against Milley, and better generals in our Military, of which we have many, should get involved so that another Afghanistan disaster never happens again. Remember, I was the one who took out 100% of the ISIS Caliphate. Milley said it couldn’t be done!

For the record, I never even thought of attacking China—and China knows that. The people that fabricated the story are sick and demented, and the people who print it are just as bad. In fact, I’m the only President in decades who didn’t get the U.S. into a war—a well known fact that is seldom reported.

When asked to comment on Trump’s comments about Milley, Psaki said, “I don’t think I have any further response to the president other than to reiterate the context of this moment in time, what everybody’s talking about here and what we’re reporting on.”

For any inquiries, contact Amnon Free Press (Amnon Jobi Jakony) by writing to editor [at] amnonfreepress.com. Discover a world of hyper-local news below.
Other News:   [VIDEO] Joe’s Latest 5-Seconds of Talking Are So Creepy, His Poll Numbers Might Go Even Lower