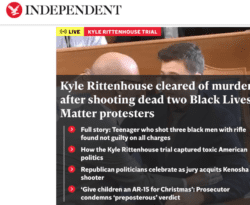 The Independent falsely claimed that Kyle Rittenhouse shot three black men after he was acquitted of all charges Friday for shooting three white men in self-defense during the August 2020 Kenosha, Wisconsin, riots.

“Full story: Teenager who shot three black men with rifle found not guilty on all charges,” the Independent wrote in a bullet point on the main page of its website Friday. The error was quickly corrected, although the outlet did not publicly acknowledge or apologize for the mistake.

A depressing example of how the British media misreported the Kyle Rittenhouse trial as badly as the US media. This is the @Independent's report on the verdict.

The Independent then altered the page to correct the error, although the article linked to in the bullet did not include a correction note from the editor to acknowledge the mistake. The article’s SEO description still incorrectly stated that the three men who were shot were black as of Friday afternoon, but has since been updated.

Other News:   World Tennis Association threatens to pull tournaments from China over Peng Shuai disappearance: 'This is bigger than the business'

The police shooting of Jacob Blake sparked the 2020 Kenosha riots. The current version of the Independent article mentioned that Blake was black, but did not acknowledge that the men Rittenhouse shot were white.

Journalist Glenn Greenwald said that the same error had occurred in numerous Brazilian newspapers as well as in a Dutch publication Friday.

Another major Brazil news outlet last week. Where do you think they all get this from? How did news outlets around the world all make the same major mistake?

It's because they relied on the US media, which purposely spread this racially inflammatory lie for 18 months. pic.twitter.com/tfHdJgmVje

“The largest media outlets in Brazil this week had to retract their articles on the Rittenhouse case because they claimed it was a case of a white youth having shot and killed two black men. They got this from the US media, which deliberately cultivated this false narrative,” Greenwald wrote.

Trying not to wade too deep into the poisoned well of Rittenhouse Discourse, but a number of people I follow seem to believe the people he shot were Black which I think says something about the level of engagement with the specifics of the case.

Rittenhouse was acquitted on all counts Friday after three days of deliberations in the widely publicized trial.

Other News:   UK college admits that white people can be victims of racism

The Independent did not respond to the Daily Caller News Foundation’s request for comment.

For any inquiries, contact Amnon Free Press (Amnon Jobi Jakony) by writing to editor [at] amnonfreepress.com. Discover a world of hyper-local news below.
Other News:   EXCLUSIVE: Byzantine Catholic Patriarchate Reaches Out to TGP – Shares Report on Mexican Bishops Blackmailing Priests to Get Vaccinated