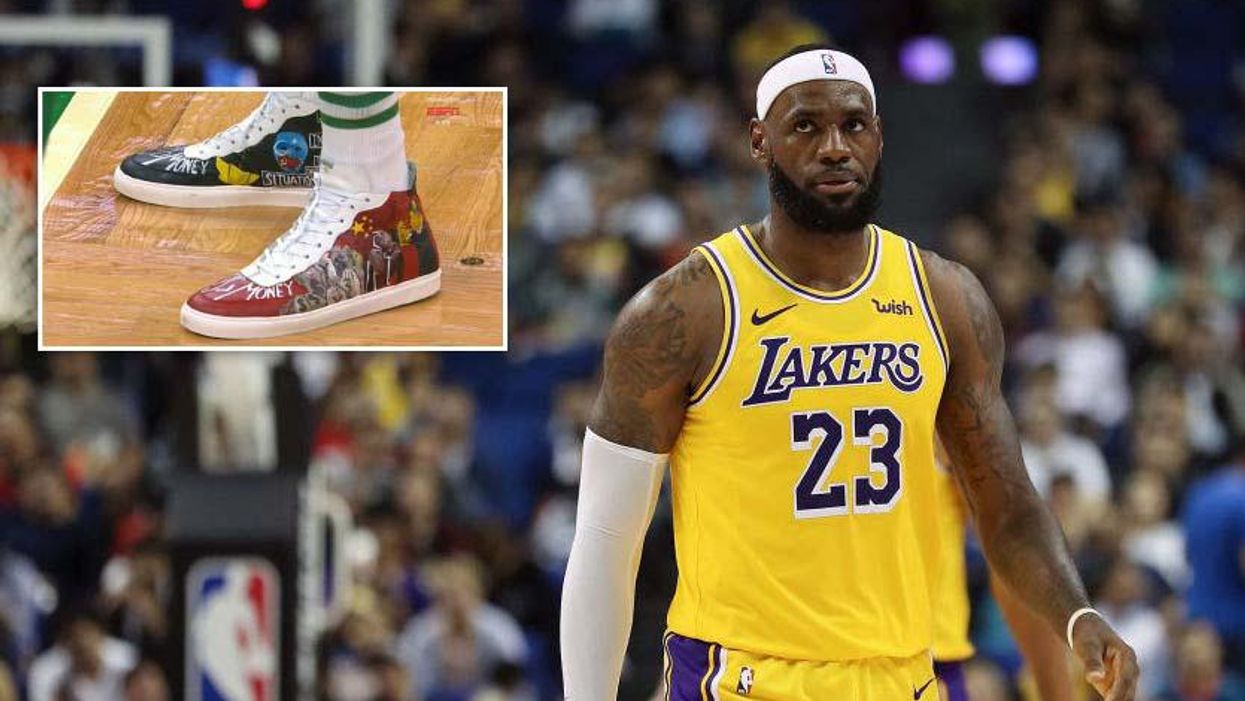 NBA superstar LeBron James suggested Friday that Boston Celtics center Enes Kanter is not a man because Kanter has not directly confronted him over criticisms involving Nike and China.

During a game between the Los Angeles Laters and Celtics on Friday — in which the Celtics beat the Lakers 130-108 — Kanter wore shows that depicted James bowing to Chinese President Xi Jinping, who places a crown on James’ head.

Boston Celtics player Enes Kanter wore sneakers tonight \u2014 while playing against the Lakers \u2014 with LeBron James bowing down while China\u2019s dictator puts a crown on his head.pic.twitter.com/E1L4ZyPWrF

Kanter, in addition to being a highly successful basketball player, has made a name for himself by publicly criticizing brutal regimes, like Turkey, the country of origin for his family.

In recent months, however, Kanter has stepped up his criticism to include China. Kanter has called Jinping a “brutal dictator,” and he has declared support the “Free Tibet” movement. Kanter’s criticism of China has included taking aim at James, who plays for the Los Angeles Lakers and has a highly lucrative endorsement deal with Nike.

“[W]hen it comes to China, Nike remains silent,” Kanter said last month. “You do not address police brutality in China, you do not speak about discrimination against the LGBTQ community, you do not say a word about the oppression of minorities in China. You are scared to speak up.”

Nike likes to say “Just Do It.” Well, what are you doing about the slave labor that makes your shoes? That slave labor that makes you rich.To the owner of Nike — Phil Knight — I have a message for you. How about I book plane tickets for us, let’s fly to China together. We can try to visit these slave labor camps and you can see with your own eyes. LeBron James and Michael Jordan, you guys are welcome to come too. Nike must be a participant in this. Stop the hypocrisy. Stop the modern-day slavery now.

On Thursday, Kanter posted photos of his shoes online with the following message: “Money over Morals for the ‘King'[.] Sad & disgusting how these athletes pretend they care about social justice[.] They really do ‘shut up & dribble’ when Big Boss[.] Did you educate yourself about the slave labor that made your shoes or is that not part of your research?”

Other News:   HUGE: Protests Against Vaccine Mandates in Italy Reach Their 18th Week As the Rest of Europe Rises Up and Joins In (VIDEO)

How did James respond?

James was asked about Kanter’s criticism after the Lakers lost to the Celtics. James, clearly triggered by the question, suggested that Kanter is not a man because he did not confront James to his face.

“I think if you know me you know I don’t really give too many people my energy and he’s definitely not someone I will give my energy to,” he said. “Trying to use my name to create an opportunity for himself. Definitely won’t comment too much on that, if any. That will be where I lay that at.”

“He’s always kind of had a word or two to say in my direction, and as a man, if you got an issue with somebody, you really come up to him,” James continued. “He had his opportunity tonight. I seen him in the hallway, he walked right by me.

LeBron is totally in China\u2019s pocket. Gets asked about human rights in China and attacks @EnesKanter for raising the issue.pic.twitter.com/3bchAnturD