Psaki Dodges Question About Whether Biden Will Apologize To Kyle Rittenhouse 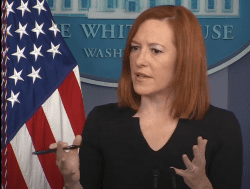 White House press secretary Jen Psaki dodged questioning on Tuesday over whether President Joe Biden will issue an apology to Kyle Rittenhouse for labeling him a white supremacist.

“Would the president ever apologize to the acquitted Kenosha shooter Kyle Rittenhouse for suggesting online and on TV that he is a white supremacist?” Fox News White House correspondent Peter Doocy asked Psaki at a briefing.

Rittenhouse was included in a Biden campaign video showing a montage of alleged white supremacists. Biden called out then-President Donald Trump for refusing “to disavow white supremacists on the debate stage last night.”

“Well, let’s be clear what we’re talking about here. This is about a campaign video released last year that used President Trump’s own words during a debate as he refused to condemn white supremacists and militia groups,” she responded. Psaki went on to say that Trump “actively encouraged” those groups during his presidency.

Doocy: "Would the president ever apologize to the acquitted Kenosha shooter Kyle Rittenhouse for suggesting online and on TV that he is a white supremacist?"

On the debate stage, Trump said he was “prepared” to condemn white supremacists and militias, but never actually did. When Biden brought up the Proud Boys, Trump told them to “stand back and stand by,” noting that “somebody’s got to do something about Antifa and the left .”

Trump later walked back those statements after the debate, claiming he did not know who the Proud Boys were and condemning them alongside white supremacists.

Rittenhouse called Biden’s categorization of him “actual malice” and accused him of “defaming his character” in an interview with Tucker Carlson Monday. “Mr. President, if I can say one thing to you, I would urge you to go back and watch the trial and understand the facts before you make a statement,” he said.

Psaki Dodges Question About Whether Biden Will Apologize To Kyle Rittenhouse is posted on Conservative Daily News – Where Americans go for news, current events and commentary they can trust – Conservative News Website for U.S. News, Political Cartoons and more.

For any inquiries, contact Amnon Free Press (Amnon Jobi Jakony) by writing to editor [at] amnonfreepress.com. Discover a world of hyper-local news below.
Other News:   Police arrest ex-NFL player after video surfaces reportedly showing him brutally beating ex-girlfriend in front of their infant