Rep. Kevin Brady: ‘This Is Not Only the Largest Spending Bill But the Largest Tax Hikes’ We’ve Seen in Our Lifetime 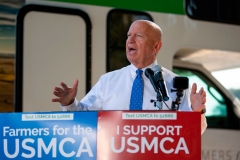 Representative Kevin Brady speaks during a rally for the passage of the US-Mexico-Canada Agreement (USMCA) near the US Capitol in Washington, DC, on September 12, 2019. (Photo by ALASTAIR PIKE/AFP via Getty Images)

One was “to protest the process where you have the largest spending bill in American history, that was written in secret, that no one really knows what’s in it and now that the results are in, we know that it adds hundreds of billions of dollars to the national debt even counting the budget gimmick, but the true cost to the national debt over the decades is more closer to $3 trillion,” the congressman said.

“Secondly, pull the curtain back on what exactly is in it, and as the leader made clear, this bill is not paid for. It violates the president’s pledge to not tax middle class Americans. It is a huge tax giveaway to the wealthy. Two out of three millionaires will receive a tax cut in this bill, and of course this will drive inflation up even higher and longer on American families,” Brady said, adding that the points McCarthy was making “was exactly what the American people need to hear.”
Brady said that Biden’s claim that no one making $400,000 or less will pay higher taxes is “nonsense,” and “we’ve seen the results.”

Other News:   Joe Hoft on Italian TV: The Gateway Pundit Stands with Archbishop Vigano in His Call for Worldwide Anti-Globalist Alliance

“So both the Joint Committee on Taxation and the liberal Tax Policy Center confirm that one out of every three middle class Americans will see a tax hike starting next year. That percentage will grow over time in a significant way, and again, that’s in contrast to two out of three millionaires getting tax cuts,” the congressman said.

“So yeah, there’s no question, on small business people, on working families, all will see tax hikes, and then as we learn more, we see things, we’ve discovered things like the toddler tax, where families who use child care, who make even a dollar more than about $65,000 a year will see a huge increase in child care cost, more than $1,000 a month. It goes on and on. This is not only the largest spending bill but the largest tax hikes that we’ve seen in our lifetime,” he said.

Other News:   Bill Maher slams AOC for dismissing critics of wokeness — then issues challenge he predicts she will reject

Brady warned that the bill is filled with half a trillion dollars worth of “green pork” also known as “green welfare giveways” to the wealthy and the largest corporations.

“The fact that you’re working hard as a single mom, and you’re spending $12 and-a-half thousand dollars of your taxes to your wealthy neighbor so they can buy a luxury electric vehicle is offensive,” the congressman said.

“I mean sending $450,000 to those who crossed our border illegally while we pay the survivors of Gold Star families, of those we lost in the military far less than that, when you see tax increases on small businesses and paying people more to stay home to work, stay home, then to reconnect to work, which by the way, experts believe this will drive about 2 million more Americans out of the workforce at a time we desperately need them, on and on and on,” he said.

“It is an offensive bill, and I didn’t mention, at the very end they snuck in tax breaks for wealthy trial lawyers, for recording artists, to — for the media, to hire local reporters. It is I mean one of the most offensive tax giveaways for special interest than, Maria, than you and I have ever seen,” Brady said.

Other News:   Experts befuddled by 'mysterious' fact that Africa is less than 6% vaccinated but has avoided COVID disaster — unlike Europe and the US

Democrats are “obsessed with this greatest expansion of the welfare state in our lifetime, with the half a trillion dollars of green welfare in this,” the congressman said. “It is driving them to be transformational in their view, government control, cradle to grave. That’s driving it, but now the results are in.

“We know this will drive inflation up higher. We know it will drive people out of the workforce. We aren’t even talking about the crippling tax hikes, which really in my view are an economic surrender to China, Russia, Japan, and Europe. It will drive U.S. jobs overseas in a major way. I think we’ll drive more investment and manufacturing oversea as well,” he said.