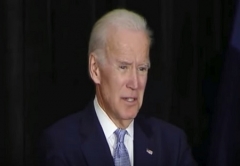 In a statement issued Friday after a jury had found Kyle Rittenhouse “not guilty” on all five counts against him, President Joe Biden declared that the verdict left him “feeling angry and concerned,” as it did many other Americans.

Reacting to the verdict in the trial, which polarized the nation and was passionately politicized by liberal media, Pres. Biden expressed his anger and concern, while acknowledging that “the jury has spoken:

“While the verdict in Kenosha will leave many Americans feeling angry and concerned, myself included, we must acknowledge that the jury has spoken.”

Biden went on to “urge everyone to express their views peacefully.”

The president’s full statement is presented below:

“While the verdict in Kenosha will leave many Americans feeling angry and concerned, myself included, we must acknowledge that the jury has spoken. I ran on a promise to bring Americans together, because I believe that what unites us is far greater than what divides us.  I know that we’re not going to heal our country’s wounds overnight, but I remain steadfast in my commitment to do everything in my power to ensure that every American is treated equally, with fairness and dignity, under the law.

“I urge everyone to express their views peacefully, consistent with the rule of law.  Violence and destruction of property have no place in our democracy.  The White House and Federal authorities have been in contact with Governor Evers’s office to prepare for any outcome in this case, and I have spoken with the Governor this afternoon and offered support and any assistance needed to ensure public safety.’

Rittenhouse was charged with five counts, including first-degree homocide, as a result of his actions at last year’s riots in Kenosha, Wisconsin, Fox News reports:

“Rittenhouse was facing the five charges after he fatally shot two people and injured a third person during the second night of civil unrest in Kenosha on Aug. 25, 2020. His attorneys argued that the then-17-year-old was acting in self-defense after being attacked from behind when he shot Gaige Grosskreutz, 27, as well as deceased Joseph Rosenbaum, 36, and Anthony Huber, 26 in the riots following the police shooting of a 29-year-old Black man, Jacob Blake.”

For any inquiries, contact Amnon Free Press (Amnon Jobi Jakony) by writing to editor [at] amnonfreepress.com. Discover a world of hyper-local news below.
Other News:   Biden Regime Ignores Courts Again and Tells Businesses to Move Forward with Vaccine Mandate