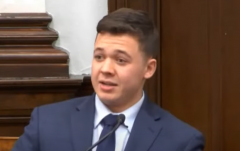 Following Kyle Rittenhouse’s acquittal of all five felony charges, several conservative commentators and politicians have offered their support of and even willingness to donate money to Rittenhouse for a defamation lawsuit against mainstream outlets who called him a white supremacist and vigilante.

“I will donate money to Kyle Rittenhouse so he can sue the CRAP out of corporate media,” Glenn Beck, co-founder of Blaze Media, posted on Twitter.

I will donate money to Kyle Rittenhouse so he can sue the CRAP out of corporate media. pic.twitter.com/bVAekXWN9D

Blaze pundit Dave Rubin and radio host Dana Loesch both committed to donating to a fund for Rittenhouse. Commentator Tim Poole also suggested his willingness to support, tweeting “How do we raise money for Kyle Rittenhouse’s defamation fund?”

A jury acquitted Kyle Rittenhouse Friday afternoon for his role in the riots in Kenosha, Wisc. during the summer of 2020. The jury found Rittenhouse to have been acting in self-defense found him not guilty of all five felony charges, with Judge Bruce Schroeder having previously dismissed a misdemeanor weapons charge.

Media outlets and shows like CNN, MSNBC, “The View,” and The New Yorker have been referring to Rittenhouse as a white supremacist, a vigilante, and a racist for the last 3 months, regardless of the real narrative that was explained during his trial.

President Joe Biden tweeted a video featuring Kyle Rittenhouse, suggesting he was a white supremacist before the 2020 election.

“They’ve lied about him the whole time. They’ve destroyed his life,” Beck said in his video. “It is time to say enough is enough with the corporate media.”

Nicholas Sandmann, the 19-year old Covington Catholic student who settled a defamation lawsuit against The Washington Post for painting him as a racist, described the similarities between Rittenhouse’s case and his own.

“The attacks on Kyle came from the national news media, just as they came for me,” Sandmann wrote in a Daily Mail article. “They came quickly, without hesitation, because Kyle was an easy target that they could paint in the way they wanted to.”

Sandmann encouraged Rittenhouse, if he was willing to take up the mantle, to fight for himself and hold the media accountable for their mischaracterizations and lies.

“So, if Kyle is prepared to take on another burder in his early life, with the acceptance that it might result in nothing,” Sandmann wrote, “I answer, give it a shot and hold the media accountable.”

Many other conservatives have also expressed their support for a potential defamation lawsuit, including Media Research Center President and CNSNews Founder Brent Bozell, who said “I can’t wait for Rittenhouse to go full Covington Kid and sue the media for defamation.”

I can’t wait for Rittenhouse to go full Covington Kid and sue the media for defamation.

Matt Walsh, a Daily Wire personality, tweeted his hope that Rittenhouse will bankrupt the corrupt media who defamed him.

“I hope Rittenhouse bankrupts all of you dirtbags in media who smeared him as a white supremacist,” Walsh wrote. “I hope he ruins your life. I want you to suffer. It’s what you deserve. It’s justice.”

I hope Rittenhouse bankrupts all of you dirtbags in media who smeared him as a white supremacist. I hope he ruins your life. I want you to suffer. It’s what you deserve. It’s justice.

Kyle Rittenhouse will have the largest legal fund raised in history to start suing the corporate media and evil Democrats.

Megan Williams is a CNSNews intern and junior at Hillsdale College. She is majoring in Rhetoric and Public Address with a Journalism minor. She is the assistant opinions editor for the Hillsdale Collegian and enjoys covering local events, from concerts to conventions. Born and raised in Southern California, Megan is excited to experience D.C. and grow as a journalist with CNSNews.