Pelosi: ‘That’s What Took Me Out of the Kitchen to Congress, From Housewife to House Speaker–For the Children’ 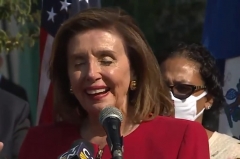 (CNSNews.com) – House Speaker Nancy Pelosi (D.-Calif.) gave a press conference in East Hartford, Conn., on Wednesday to promote President Joe Biden’s proposal for an expanded child tax credit and noted that she was a mother of five and that concern for the well-being of children is what took her “out of the kitchen to the Congress, from housewife to House Speaker.”

“I have five children of my own. That’s why I got the nine grandchildren,” Pelosi said.

“And when people ask me: Why did you ever go into politics?  What motivated you?  I tell them my ‘why,’” she said.

“And that’s what took me out of the kitchen to the Congress, from housewife to House Speaker–for the children,” she said.

“So, this vision of Joe Biden is just so aspirational and so in keeping with addressing the needs of our children,” said Pelosi.

“The credit would also be delivered regularly,” says the White House. “This means that families will not need to wait until tax season to receive a refund. Instead, they will receive regular payments that allow them to cover household expenses as they arise.