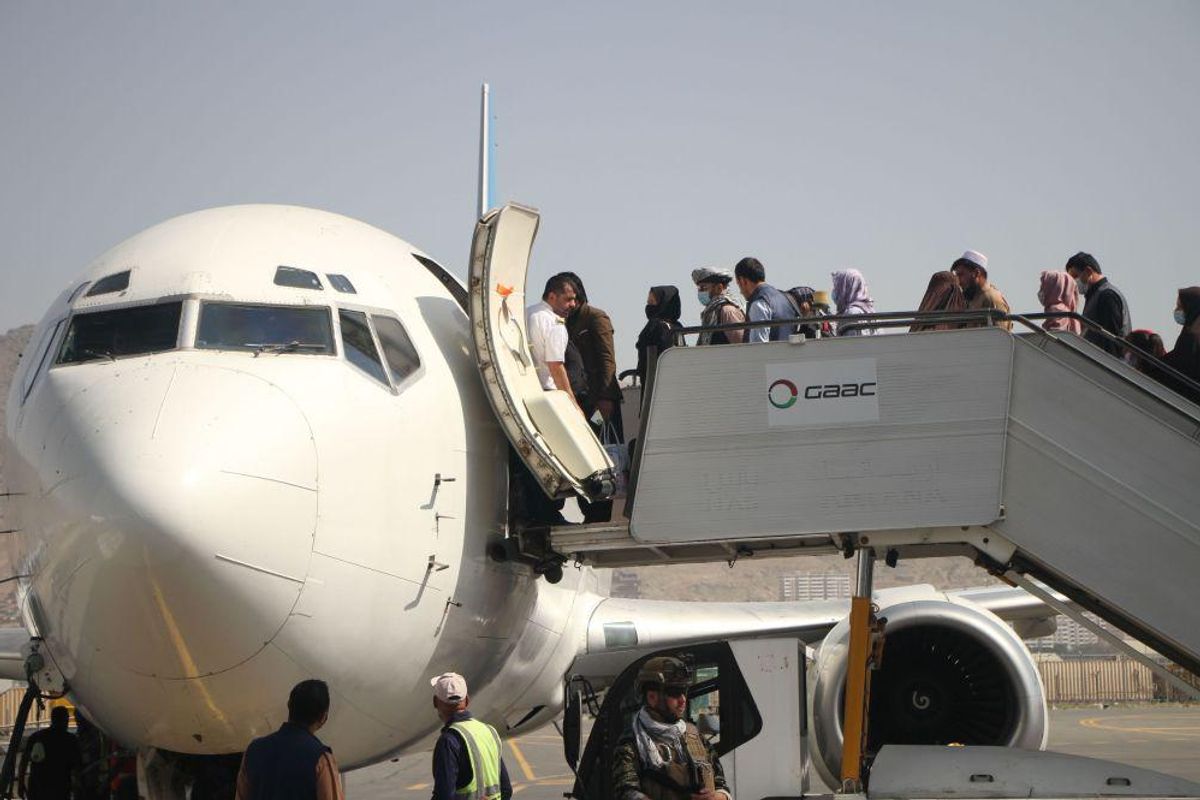 The U.S. State Department is responsible for interfering with the departure of several planes holding American citizens and Afghan nationals at the Mazar-i-Sharif airport, BlazeTV host Glenn Beck reported on-air during his radio show Tuesday.

The planes — which held at least 100 American citizens and 1,000 Afghan nationals — were chartered by Mercury One and The Nazarene Fund, a charity founded by Beck aimed at facilitating evacuations from Afghanistan amid the U.S. military’s withdrawal and the Taliban’s takeover of the country.

Over the weekend, news broke that multiple planes had been prevented from taking off after the Taliban refused to grant permission for the departure. But according to Beck, it wasn’t the Taliban that initially stopped the planes from exiting the country.

Rather, it was the State Department that refused to grant landing clearance to the planes, preventing them from departing. The department allegedly called off the flights at the last minute, declining to approve the manifest. He added that U.S. officials went on to hand over the manifest to the Taliban.

“They were dismissed from the airport while the State Department works this out with the Taliban,” he continued, noting that many of the passengers are now waiting things out in safe houses, “but not all.”

“This was like the State Department sending up flares, saying [to the Taliban], ‘Hey, look over here,'” he added later.

The radio personality insisted that his team is working tirelessly to complete its mission despite the recent setback.

“We had all of it,” he said on the radio. “We’ll have to go back and get the people now for those planes. But as soon as we get the green light, those people will be able to go back on to those planes. And if there’s one missing, I swear to you … We have also eight to 10 other planes that are ready to fly out if the State Department will just let us be.”

TheBlaze reached out to the State Department with regard to the allegations. In response, a department representative pointed to remarks made Tuesday by Secretary of State Antony Blinken at a press conference in Doha, Qatar.

“We’re working around the clock with NGOs, with members of Congress and advocacy groups, providing any and all information and doing all we can to clear any roadblocks that they’ve identified to make sure that charter flights carrying Americans or others to whom we have a special responsibility can depart Afghanistan safely,” Blinken insisted at the conference.

“We’ve also been engaged with the Taliban on this topic, including in recent hours,” he added. “They’ve said that they will let people with travel documents freely depart. We will hold them to that.”

Beck noted that several members of Congress — including Republican Sens. Ted Cruz (Texas) and Marsha Blackburn (Tenn.) and Democratic Sen. Richard Blumenthal (Conn.) — were directly involved in the evacuation efforts and were furiously urging the State Department not to block the flights.

Cruz confirmed to TheBlaze on Tuesday that his office has been coordinating with The Nazarene Fund and other NGOs on evacuations and that the Biden administration has been obstructing efforts.

“I’m proud of that critically important work, but Biden-Harris officials can’t even get out of their own way. Now their incompetence has created the entirely predictable risk of a hostage crisis,” the senator said.

In response to inquiries about the situation, the State Department has effectively thrown up its hands and conceded that there’s not much it can do.

“We do not have personnel on the ground, we do not have air assets in the country, we do not control the airspace — whether over Afghanistan or elsewhere in the region,” a State Department spokesman told TheBlaze on Monday.

But Beck took issue with that claim, as well, telling TheBlaze that with its statement, the department is “knowingly misleading the American people.”

He said that while the State Department doesn’t control the airspace anymore, it does have control over whether commercial planes take off and land in approved locations.

TheBlaze reached out to Mercury One regarding Beck’s recent comments and the organization responded, “Although Glenn Beck is a political commentator, Mercury One and The Nazarene Fund are not political organizations and sometimes the things Glenn says on the radio do not represent the charities.”