JD Vance on Biden’s Vaccine Mandate: ‘Do Not Comply,’ He’s a ‘Geriatric Tyrant’ 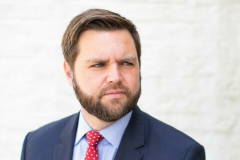 “Do not comply with the mandates,” Vance said in a Sept. 9 press release. “Only mass civil disobedience will save us from Joe Biden’s naked authoritarianism.”

On Thursday, Biden announced that all federal employees of the executive branch must be fully vaccinated, as well as the workers of “contractors that do business with the federal government.” That’s an estimated 2.5 million workers.

In addition, the Labor Department is developing a rule that will “require all employers with 100 or more employees to ensure their workforce is fully vaccinated….” That’s an estimated 80 million workers.

Also, most Medicare and Medicaid health care employees must be vaccinated, another 17 million workers.

In his Sept. 9 press release, Vance, who is running for retiring Sen. Rob Portman’s (R) seat, said, “Joe Biden’s proposed COVID mandates are not only illegal and unconstitutional, they’re morally reprehensible. While Joe Biden likes to talk about millions of American citizens as if they’re nothing more than vermin to be ruled by him and his friends, he’s revealed himself to be nothing more than a geriatric tyrant.”

“No American citizen should ever be forcibly segregated by the government over their vaccine status.”

“No American citizen should ever be forcibly segregated by the government over their vaccine status,” said Vance. “The federal government’s attempt to bully and coerce citizens into choosing between their livelihood and their own bodily autonomy must be resisted.”

Other News:   Lib Activist Group Warns Protesters: Men Can Have Abortions Too, Comparing GOP to Taliban is ‘Islamophobic’

“I have a simple message for America’s business community: DO NOT COMPLY,” he said.

“Do not comply with the mandates,” he added. “Do not pay the government fines. Don’t allow yourself to be bullied and controlled. Only mass civil disobedience will save us from Joe Biden’s naked authoritarianism.”

Vance, 37, grew up in Middletown, Ohio. His mother and family are from Breathitt County, Kentucky, part of Appalachia. The family history is filled with poverty, drug addiction, and alcoholism, which Vance details in his best selling book, Hillbilly Elegy: A Memoir of a Family and Culture in Crisis.

Vance joined the Marines and served in the Iraq war. He later earned a B.A. degree from Ohio State University and a J.D. from Yale University. He describes himself as a conservative and an outsider.

Vance was sharply critical of Donald Trump in the 2016 presidential race, stating that his policy views ranged from “immoral to absurd.” He also described Trump as “reprehensible.”

However, earlier this year Vance said he regretted those remarks and apologized, on television, to the former president.

“Like a lot of people, I criticized Trump back in 2016,” Vance said. “And I ask folks not to judge me based on what I said in 2016, because I’ve been very open that I did say those critical things and I regret them, and I regret being wrong about the guy.”