Priests for Life Defend Texas ‘Heartbeat’ Law: ‘If You Don’t Like the Law, Come and Take It’ 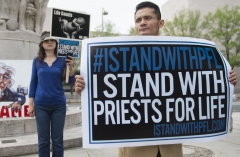 “We are ready to extract the political price from politicians, starting with Joe Biden and Nancy Pelosi, who have injected the federal government into places it does not belong,” the leader of the world’s largest Catholic pro-life organization dedicated exclusively to ending abortion says.

“If you don’t like the law, come and take it. We’re ready,” Priests for Life’s National Director Father Frank Pavone said in a statement Friday, responding to the efforts of the Biden Administration, Congressional Democrats, abortion activists and media to negate Texas’ new law defending the right to life of the unborn after a heartbeat is detected.

“We know full well that the other side is in hysterics, but their reaction is not reasonable,” Fr. Pavone said, promising that the pro-life movement is united and prepared to defend the law in court:

“They are reading things into the law that aren’t there and in desperation are striking out at pro-lifers. But that’s what they have been doing for almost 50 years, so we’re used to it.

“We are ready to do battle on a number of fronts. First and foremost, and as always, the pro-life movement stands ready to extend a hand to any woman who had been planning an abortion and now is planning instead for the birth of her child. We are here to help.

“We are ready for the legal challenges to come because we are confident that the Texas Heartbeat Law has staying power.”

Fr. Pavone said that politicians like Biden and Pelosi must be made to pay a political price if they continue to attack this just law:

“We are ready to extract the political price from politicians, starting with Joe Biden and Nancy Pelosi, who have injected the federal government into places it does not belong. They could have let this law follow its course – facing legal challenges along the way. Instead they have looked to impose their radical abortion ideology on a state whose democratically elected lawmakers passed this life-saving bill.”

What’s more, Priests for Life plan to use the attention paid to the Texas law as an opportunity “to introduce people to the unborn children in the early stages of pregnancy”:

“We are ready, finally, to use the attention being paid to this law as a teachable moment, when we can show and tell ordinarily complacent Americans about life in womb. My Heart Beats Just Like Yours, a Priests for Life initiative launched shortly before the Texas law was enacted, aims to introduce people to the unborn children in the early stages of pregnancy, when they are most likely to be aborted. There is no longer a way for abortion extremists to ignore the science. A separate and unique human being dies in every single abortion.”

“So if you oppose it, then as Texans say (and I myself have been a resident of Texas), come and take it,” Pavone said, alluding to an expression coined during the Battle of Gonzales in 1835, when American colonists refused to give a canon back to the Mexican army.

For any inquiries, contact Amnon Free Press (Amnon Jobi Jakony) by writing to editor [at] amnonfreepress.com. Discover a world of hyper-local news below.
Other News:   Ammo Alone Won’t Keep You Safe. Here’s What To Do When It’s Hard To Find